Start typing and press
Enter to search
Skip to content

“He who permits himself to tell a lie once, finds it much easier to do it a second time and third time till at length it becomes habitual.” – Thomas Jefferson

Exploring the lives of people who have been suffering at the hands of manipulative, compulsive liars, Abby Ellin’s Duped is a delve into the world of double lives, false identities and the con artists that ruin lives. I first heard about Duped when listening to The High Low with Dolly Alderton and Pandora Sykes (a podcast I highly recommend), and knew I had to read it. Pathological liars? Criminal narcissists? Secret lives? Right up my alley.

Ellin’s fascination with these people stemmed from a failed engagement with “The Commander”, an ex-Navy Seal who claimed to be high up in the CIA, working in the Pentagon and masterminded the raid on Osama bin Laden. His stories were so wild and so outrageous, it seemed impossible for him to make them up. But he did, and Ellin vividly describes the betrayal that she felt when his lies and deceit unravelled. After recovering from his behaviour, she set out of explore the unheard world of the victims of pathological liars, compulsive narcissists and those who lead double lives. She talks through many different cases where peoples lives have been ruined by dupers and even talks to some who themselves have been leading a life of lies. 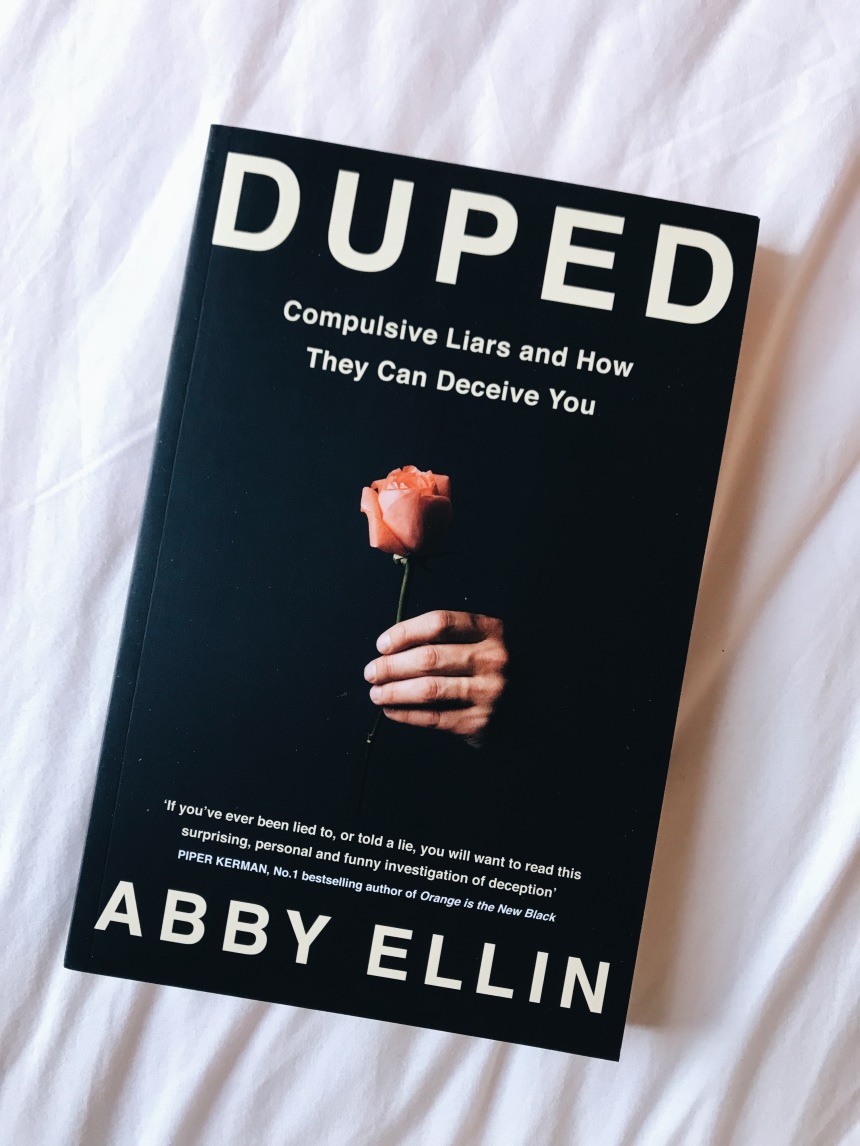 She looks into the art and science of lying, and talks about the differences between these types of people and everyone else. We all lie, there’s no denying that, but there’s a difference between telling someone you like their haircut not to hurt their feelings and lying about every part of your life. The line between acceptable lies and unacceptable deception is thin – is there really that much difference between us and them? Or do we just like to think there is?

What I liked most about Duped was that it married her personal story and her research into what, why and how people behave like this. It gave context and allowed there to be a personal, emotional element to the book’s narrative, as I often find books like this can become quite clinical without it. Her writing is witty, vulnerable and brave. She admits to her own mistakes and gets the truth from people that have had their worlds turned upside down by manipulative people.

As a true crime junkie (who isn’t these days?) I’m always fascinated by these kinds of people and what they are capable of doing. It seems like a world away from my own life, but how do I know that there isn’t a person like this in my life? While this book has raised more questions for me than it has answered, it has made me realise the scope and depth of these situations and made me realise that it truly isn’t the stuff of Hollywood fantasy.